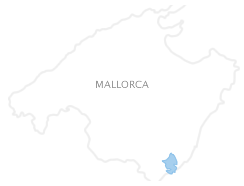 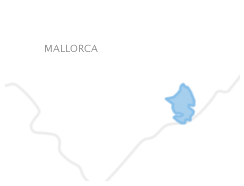 The Mondragó Natural Park is located in the south of Mallorca, in the municipal area of Santanyí, and has a surface area of 766 hectares. While 95 hectares of the Park are public property, the rest of the park sits on privately owned land and estates, which, often divided into plots, are generally occupied by extensive dry crop cultivation. Mondragó was declared a Natural Park in 1992.

Centuries of agricultural and livestock activity have undeniably shaped and defined the landscape of this area. The many architectural features found here include dry stone walls and the rustic sheds that served as temporary shelters for those who cultivated the poor fields, the rotes. These structures are often made of beams or bear a conical roof, locally known as curucull. Less common are the stone hillside terraces, which sit alongside streambeds and in gullies. Other traditional structures, such as waterwheels, irrigation ditches, water collection ponds and cisterns, are associated with the use of water.

Here there are also constructions that bear witness to the use of the forest. These include charcoal mounds, the charcoal makers’ sheds and lime kilns, as well as other features, such as slipways for boats, sandstone quarries, small defence towers and smugglers’ hiding places.

The name of S’Amarador evokes a past use of the ponds as retting sites, where bundles of flax and hemp were submerged for different lengths of time to attain plant fibres. Tree trunks were also submerged here, making them more resistant, for later use as construction materials in boats and as beams for houses. Is located in the south-east of Mallorca is placed in the coast, in the navies of Llevant, in the municipal area of Santanyí.

You can arrive, for the Palma-Santanyí road (Ma-19). The accesses are signposted: from Santanyí, from S'Alqueria Blanca and from the road in Figuera creek. For the most part, the surface of the Park is made up of parched, poor, stony fields known as rotes. Here, dry farming crops mingle with trees and herbaceous plants on small plots that are generally delineated by dry stone walls. Particularly abundant are the almond tree (Prunus dulcis), the carob bean tree (Ceratonia siliqua) and the fig tree (Ficus carica), as well as cereal grains such as barley, oats and wheat.

The dry climate and the poor soils make for the predominance of scrubland, primarily consisting of the wild olive grove (Oleo-Ceratonion), with species such as the wild olive tree (Olea europaea var. sylvestris), the Aleppo pine (Pinus halepensis), the mastic (Pistacia lentiscus), the mock privet (Phillyrea sp.), the rock rose (Cistus sp.), rosemary (Rosmarinus officinalis), heather (Erica multiflora) and lavender (Lavandula dentata). Pine groves line the silhouettes of the streams, coming together with savins (Juniperus phoenicea) in the areas nearest the coast.

Worthy of note among the scrubland plants and within the Park’s pine groves are the different types of orchids: the giant orchid (Barlia robertiana), the pyramidal orchid (Anacamptis pyramidalis), the Serapias sp. and different species of the Ophrys and Orchis genera.

The animals that inhabit the Park include mammals such as the Algerian hedgehog (Atelerix algirus), the common weasel (Mustela nivalis), the genet (Genetta genetta) and the pine marten (Martes martes), as well as rodents like the European rabbit (Oryctolagus cuniculus), the Iberian hare (Lepus granatensis), the wood mouse (Apodemus sylvaticus) and the garden dormouse (Elyomis quercinus).

Yet it is birds that abound the most, as the Park is a refuge for the stone curlew (Burhinus oedicnemus), the wood pigeon (Columba palumbus), the turtle dove (Streptopelia turtur), the kestrel (Falco tinnunculus), the hoopoe (Upupa epops) and many other smaller birds including the great tit (Parus major) and the warbler (Sylvia sp.).

Some holm oaks (Quercus ilex) appear at the bottoms of gullies. Yet more striking is the presence of an important dune system at S’Amarador, which is inhabited by the sea holly (Eryngium maritimum), the sea spurge (Euphorbia paralias) and the sea daffodil (Pancratium maritimum).

With the exception of its beaches, the rocky cliff-lined coast is an ideal nesting ground for the peregrine falcon (Falco peregrinus). Also found here is the European shag (Phalacrocorax aristotelis) and the Audouin’s gull (Larus audouinii). The plants most commonly found in this rocky terrain are the Crithmo-limonietum, where sea fennel (Crithmum maritimum) and statice (Limonium sp.) also abound.

Both the rocky landscapes and the many dry stone walls are favourite resting spots for certain reptile species, including the Moorish gecko (Tarentola mauritanica). The entire seascape is inhabited by the false smooth snake (Macroprotodon mauritanicus), the Hermann’s tortoise (Testudohermanni), and the Balearic toad (Bufo balearicus).

The Park’s information centre and the shop are located near the Ses Fonts de n’Alis parking area, and the administrative office is located in the town of Santanyí, at C/ de Can Llaneres, number 8.

The areas of S’Amarador and Ses Fonts offer public parking, and there is a recreational area nearby, before reaching the coves.Public toilets are also located in these areas.

Mondragó also has different signposted itineraries and trails, and offers a guided tour service all year round.

This is a very pleasant walk that links the Ses Fonts de n’Alis car park with the beach. The itinerary takes you to the beach through the woods, skirting the pond Sa Font de n’Alis. It is an opportunity get to know many different landscapes in a short space of time and a good alternative to the road, since this agreeable walk lets you avoid traffic altogether. This walk begins at the Ses Fonts de n’Alis car park, next to the park information centre. If you get here during opening hours the centre is a great place to stop and get information about anything to do with the park. The path starts towards the back of the car park, through a narrow gate. You step out into an old farming area where vegetation progressively changes to become marine, or coastal scrubland. This kind of vegetation is known locally as ’pletes’.

This itinerary starts and finishes by the Caló d’en Garrot, also known as the Ses Fonts de n’Alis beach. You enter into a pine grove and arrive at Caló des Burgit, a small but very beautiful sandy beach. Its name is derived from the word ’brogit’ (in Catalan it can be written brogit or borgit and it means roar, in the sense of waves crashing against rocks and wind tugging on trees).

If you would like to walk through a typical Mediterranean costal wood, see the effects of the waves on the coast line and the wind on the vegetation, if you would like to come across traces of traditional exploitation of the wood and see what the main use of it is in our days, if you would like to know what the walls that define the enclosures in Mondragó are like, what the views are like from the east coast and what the beaches, that attract thousands of visitors every summer are like, then you will enjoy this itinerary from the Punta de ses Gatoves.

This itinerary covers the area surrounding S’Amarador, the largest beach in the Mondragó natural park. There is a wetland area here linked to the torrent that flows into the beach itself. The importance is in the biodiversity encountered, as it is one of the few wetland areas that remain in this coastal region.