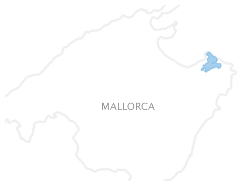 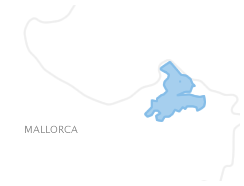 With a protected surface area of 1671 hectares, the Peninsula de LLevant Natural Park covers much of Artà’s mountain range (Muntanyes d’Artà) and includes the highest peaks of the Serres de Llevant (Puig Morei which stands at 564 m; Puig des Porrassar at 491 m; and Puig de sa Tudossa, at 441 m).

The Nature Reserves of Cap de Ferrutx and Cap des Freu, which are located in the municipal areas of Artà and Capdepera, comprise two areas of coastal cliffs at the northern end of the Península de Llevant.

Both the Park and the Reserves were officially listed as such by virtue of Decree 127/2001, of 9 November (BOIB, Official Gazette of the Balearic Islands, Number 140, of 22-11-2001). The limits of the area were later modified by Law 10/2003 of 22 December, on Tax and Administrative Measures. This natural area forms part of the European Union’s Natura 2000 Network, as both an Area of Special Protection for Birds and a Site of Community Interest.

You are in a protected natural area, which is fragile and harbours great natural and cultural values. There are some basic rules you must follow:

To get to the Park, take the road from Artà towards the hermitage, “Ermita de Betlem” road (Ma 3333) and turn right at kilometre 4.7.

The current appearance of this land is the result of centuries of human interaction with nature.

Throughout the Park are extensive olive, almond, fig and carob groves. The onslaught of tourism spurred the progressive abandonment of field activities in the less profitable areas.

To recover the pastureland for the herds of sheep and goats, the scrubland was repeatedly burnt down. This favoured the presence of species that easily grow back after fires, such as Mauritanian grass (Ampelodesmos mauritanica) and the European fan palm (Chamaerops humilis). As a result, today Mauritanian grass covers vast expanses of the Park in areas that were once inhabited by forests and other shrub communities.

The vast environmental diversity, featuring coastal cliffs, caves and chasms, springs and streams, forests and scrubland, gives this Natural Park an immense landscape value. The area is a refuge for many species that are endemic to the Balearic Islands.

As to the flora, we must point out the Balearic St. John’s wort (Hypericum balearicum) and the local cat thyme species (Teucrium marum subsp. occidentale). The area’s endemic animals include the snail species (Iberellus balearicus), the cave-dwelling false scorpion (Chthonius balearicus), and the Balearic warbler (Sylvia balearica).

Among the birds that nest here, mention must be made of the booted eagle (Hieraaetus pennatus), the peregrine falcon (Falco peregrinus), the Audouin’s gull (Larus audouinii), the European shag (Phalacrocorax aristotelis) and the Egyptian vulture (Neophron percnopterus). It is also common to see the majestic red kite (Milvus milvus), which has now returned in the Park thanks to the specie’s repopulation project.

The oldest evidence of human presence in the area resides in the archaeological remains.

There are also remnants of military architecture, such as the Talaia Moreia (a coastal watchtower) and the vestiges of an encampment built by the Republican prisoners of the Spanish Civil War. Equally worthy of note are the country estate houses, locally known as cases de possessió, which include the houses of Albarca, the terraced hillside fields and the other agricultural features (olive oil mills, water wheels and water collection structures, among others).

The abundance of the fan palm gave rise to the widespread development of palm-based craftwork in the late 19th century. There are still a few craftspeople that continue to pursue this art today.

To reserve a shelter: Reservations are made online or throught the web page of IBANAT, in catalan and spanish at the following link: www.caib.es

The farms Aubarca and Orchard were acquired by the government of the Balearic Islands in 1999. Since ancient times have always been closely linked and were part of the same property to be supplemented. On the one hand, Aubarca has always had an agricultural character, with cereal crops and olive trees, while it has a significant advantage. Onthe other hand, Es Verger had an important livestock because the estate is dominated by mountainous, areas traditionally utilized as pasture for cattle sheep and horses. The area around the houses of Albarca is the most important of all, it shows an intensive human exploitation (eras, coal heaps, lime kilns, banks, a mill, and several archaeological sites). Currently the house of lords of Albarca is a mountain refuge. Already within the limits of Es Verger, in the coastal zone, we find two more buildings (the former summer house of lords and house of Albarca livestock use) converted into mountain refuges. Regarding the natural value of these properties, it is Verger where we do most notable findings, as this property includes all of the coastal Natural Park East Peninsula (from s'Arenalet to Cala Es Verger na Picarandau) and peaks higher elevations of the Serra de Llevant. Within the grounds are found numerous caves and caverns, rocky numerous endemic plants, as well as the main areas of nesting raptors in the park. Area: 1127.9 hectares. Location: it is located in the north of the town of Arta in the Natural Park of Levante peninsula. How to get there: can be reached from the road from Arta to Betlem Hermitage (Ma-3333) and turn right at kilometer 4.7. Coordinates: 39.767117,3.35701

On year 2000 the Government of the Balearic Islands acquired the lands of s’Alqueria Vella. This estate welcomes us in the Nature Reserve of the peninsula of Llevant, since well near the access to the estate from the road of the hermitage of Bethlehem (MA-3333) it is located there the parking lot and the center of visitors of this natural space protege. S’Alqueria Vella highlights for the intense human exploitation has been there since ancient. We find there two important deposits of talaiòtic origin; two sets of country houses that include, among other elements, a mill, shelters and two fields of cultivation, zones of pasture, zones wooded and of scrub; a military detention camp from Spanish Civil War and other military constructions which arose as a result of labor that did the republican prisoners in the early 1940s, plus a large area plots installed, those established where mid-nineteenth century they tried to establish a new agricultural colony that was to promote the emergence of a new village. Walking around this building we can see the majestic flight of hawks and falcons, but can also find the grazing sheep, cows shutters, horse and cattle. Area: 373,7 hectares. Situation: it is located in the north of the town of Artà in the Nature Reserve of the peninsula of Llevant. How to get there: it can be reached from the road towards the Arta to Betlem Hermitage (Ma-3333) and turn right at kilometer 4.7. Coordinates: 39.767117,3.35701.